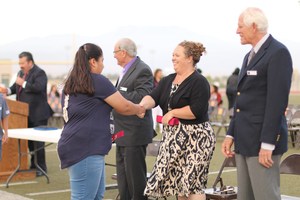 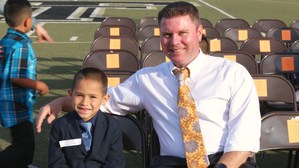 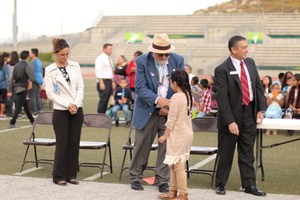 This school year 564 English Learner (EL) students were reclassified as English proficient students. On Thursday, April 27th, an event was held to recognize these students for their dedication and hard work to get to this point. The keynote speaker was Hemet Elementary’s Assistant Principal Melina Serna. Serna shared her story of being an EL student and the struggles that came with that. In addition to Serna’s speech, a senior from Tahquitz, Eric Urena, discussed his challenges of learning English. He and his family moved to the United States when he was in fourth grade. He spoke of the difficulties of learning a new language and a new culture. He said he was embarrassed that he could not speak English and decided to turn to reading. He found that reading helped him tremendously and was able to become proficient in the language and was then reclassified.

The event was full of celebrations as families cheered for the children that were able to reach this difficult goal. Students would smile as they heard their name called over the loudspeaker and walked to receive their ribbon of recognition. A first grade student at Whittier Elementary School, Noah Bazaldua, said he felt great and was happy to receive an award for the hard work he put into becoming English proficient. He also thanked Miss Johnson, Whittier’s EL Site Lead, for helping him. Gilbert Rosiles, a tenth grader at Hemet High School, said he was happy to have made it to this point, laughing and saying, “finally.”

In order for a student to be reclassified from EL to English proficient, students must meet certain requirements. They must score proficient in the California English Language Development Test (CELDT) and meet grade point average requirements. Students need a passing test score in Language Arts on their MAP or Lexile test, a four of better on their Teacher Evaluation Form, and their parent must agree their child is ready to advance from the English Language Development program.

The number of students reclassified to English proficient continues to grow every year. Due to the extensive programs offered to English Learners, more students are able to advance in their English language proficiency. Each school site has an English Learner Site Lead to monitor the EL programs at that site. For EL students in middle school, we are implementing English 3D, a program that targets Long Term English Learners (students that have been in the program 5 years or more) who need additional support in reaching English proficiency. We also implement Imagine Learning, which is a computer-based program that individualizes instruction and targets the needs of English Learners. Imagine Learning is available to all elementary and middle school students.

Students are monitored for two years after their reclassification to English proficient. If a student is struggling with the curriculum, plans are put in place to ensure the continued success of the student. In fact, data shows reclassified students have outperformed English-only peers on state tests.